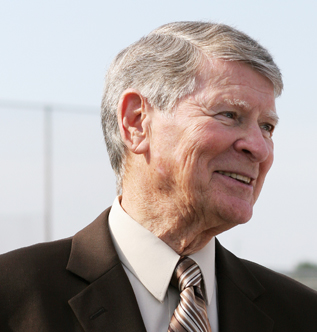 Many people remember Ed Arnold as a veteran sports and news anchor who graced the television airwaves in Los Angeles for over forty years. As an anchor/reporter for KABC and KTLA, he was closely associated with the City of Angels. In reality, Ed has been a Fountain Valley resident for five decades. Whenever he needed medical attention, he trusted the advice of his primary care doctor, Mark Monroe, MD, based at Fountain Valley Regional Hospital (FVRH). Through the years and multiple operations that included cataract surgery and orthopedic procedures on his ankle, and knee, his operations were routine and successful.

Things became more complicated when he had his gall bladder removed in 2001. “My doctors discovered after that procedure that my immune system had been compromised and a virus got into my heart,” Ed recounts. In May of 2002, Dr. Monroe referred Ed to cardiologist Satinder Swaroop, MD at FVRH. Although Dr. Swaroop closely managed Ed’s condition and the patient was highly compliant in following his doctor’s orders, the virus eventually caused Ed to experience multiple heart problems. These included cardiomyopathy, atrial fibrillation and mitral regurgitation. Of all the heart problems, the irregular heartbeat was the worst for Ed, an avid athlete who enjoyed being active.  It prevented him from enjoying his normal workouts and at its worst, even made him stop to catch his breath as he walked up the stairs in his home.

“Whenever it got bad, Dr. Monroe and Dr. Swaroop would send me to Fountain Valley for a cardioversion,” he says. The procedure uses an electrical paddle to jolt the heart back into a regular rhythm. Ed had 18 cardioversions over the years but by 2012, they were not providing the same affect. “I felt that Mr. Arnold could benefit from an ablation, which would ablate the part of his heart causing the fibrillation,” Dr. Swaroop says. Ed elected to have his procedure at a hospital in Los Angeles, where the country’s most accomplished electrophysiologist at the time was practicing. Ed actually had three ablations there, but they didn’t prevent his atrial fibrillation.

“My doctors discovered during the third ablation that I needed open heart surgery to take care of my enlarged aortic arch and damaged aortic valve. I was in danger of having an aneurysm.” Dr. Swaroop referred Ed to a cardiac surgeon at a renowned hospital in Los Angeles for aorta surgery in December 2012. His surgeons successfully repaired his aorta and replaced Arnold’s valve but he continued to have an erratic rhythm. “By January 2013, my heartbeat was irregular again. Dr. Swaroop managed it with medications but it started to get progressively worse,” Ed notes. By Fall 2014, Dr. Swaroop felt that new technologies and specialists at FVRH could help stabilize Ed’s heartbeat.

That was when Dr. Swaroop referred Ed to Rodney Ranaei, DO. Ed learned that FVRH had greatly expanded its electrophysiology services when it recruited Dr. Ranaei to Orange County. “By this stage in his care, the medications weren’t working that well for Mr. Arnold,” Dr. Ranaei notes. “He was essentially sedentary and for a person who had always been active, that was disheartening.” He gave Ed several options, including another ablation. “Dr. Ranaei was very clear about not making any promises,” Arnold says. “But if there was a chance this procedure could regulate my heart beat, I was for it.”

Ed checked into FVRH on his 75th birthday in December 2014. Dr Ranaei was able to locate the area of Ed’s heart that was causing the flutter and successfully correct it.  He went home the next day.

In many ways, it was a rebirth for Ed. “My heart has been beating regularly ever since Dr. Ranaei performed my ablation,” he declares.  “He told my wife Dixie it was the toughest ablation he had ever performed because of all the scar tissue in my heart. I can say with all sincerity that I feel better now than I have in 13 years.”

As a reporter, Ed always looked for the facts in any new story. “I learned that Fountain Valley had acquired the same equipment and medical expertise that was equal to—if not better---than that found in Los Angeles. When I found out we were so well equipped at FVRH before my last ablation, I thought ‘Wow! I don’t need to go to L.A. anymore.’ I hated the drive. Dixie would have to stay in a hotel or sleep in my hospital room when I had procedures in L.A., and follow-up visits meant having someone drive me which took over an hour each way. For my doctor appointments now, I drive myself and it takes just a few minutes to get there. There’s no stress. And there is a comfort level of being at my home hospital.”