Skip to main content and our Accessibility Statement may be found in the footer of our website.
Back To Cardiovascular Stories

Scoring Survival in the Match of Her Life 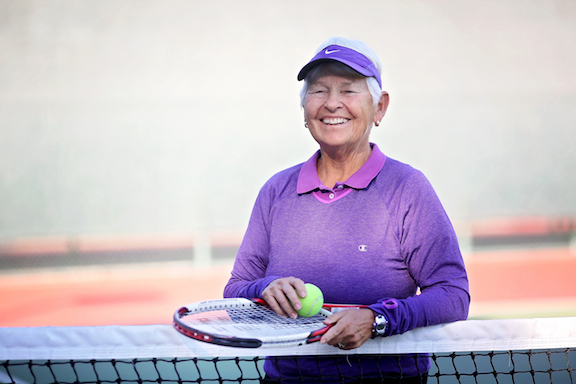 Cheryl Smith was having a good day last July 19th, having just played two hours of tennis at a club in Fountain Valley. That was typical for the 72-year old semi-retired insurance agent, who also teaches tennis and plays competitively. Cheryl was resting after her game when her left arm started to hurt.  “As I sat on the bench, I realized I was very weak, and then I regurgitated uncontrollably,” she says. My breathing became difficult. I knew I was having a heart attack.”

Cheryl rasped a request to a player on the next court to call an ambulance. What happened next is a blur to her. “The ambulance came and took me straight to Fountain Valley Regional Hospital & Medical Center. I remember hearing a loud voice, but not much else. By then I was in extreme distress. The only conscious thought I had was, ‘I have no control of this.’ I didn’t know I was dying.”

The minute Cheryl arrived she was whisked into the cardiac catheterization lab. There, her doctors inserted a catheter into her groin and the first image from Cheryl’s coronary angiogram showed that she had a total blockage in her main artery.  That was all her doctors needed to know before passing a delicate wire through her artery to open the blockage. Cheryl later learned that the interventional cardiologist operating on her, Tuan Nguyen, MD, opened the occluded artery in less than 10 minutes from the time she arrived in the cath lab.  But Cheryl wasn’t out of the woods yet.

“Sometimes, patients experience what we call reperfusion phenomenon,” Dr. Nguyen explains. “It occurs when a heart that has been starved by an arterial blockage reacts to the sudden flood of blood, causing fibrillation of the heart.” The arrhythmia is often fatal. But Cheryl’s medical team was well prepared, despite the extreme stress of trying to save a dying patient. They applied the defibrillation paddles and shocked her heart four times before its beating normalized. During her time in the cardiac cath lab, Cheryl also had a stent implanted by Dr. Nguyen to keep her artery open.

Caring for patients suffering a heart attack is something that the specialists at FVRMC do every day.  Fountain Valley has demonstrated that it meets or exceeds quality-of-care measures associated with diagnosing and treating heart attacks. The “door to balloon” time in Cheryl’s case—10 minutes—is much less than the 90-minute national guideline and the 65-minute window that is the national average.

Cheryl spent four days in FVRMC’s intensive care unit before being discharged on day five after her ordeal. She feels it is important for other women to know that the classic symptom of a heart attack—chest pain—was not the reason she called for an ambulance. Like many women who suffer heart attack, her symptoms were different. But more than anything, she feels incredibly fortunate.

Cheryl is back on the tennis courts but is treating her heart like any other injured muscle by playing slowly and cautiously. She hopes her game will eventually be just as robust and that she has many more good days ahead—but she won’t take them for granted.

“The whole experience took five days to live, to die, and to live again. I am thankful every day of my new life and for the marvelous capabilities of those I encountered during my heart attack.”